A Day on the Frontlines of CT’s Kids Mental Health Crisis: ‘The Needs Have Changed’

Originally published in CT Insider by Alex Putterman on September 10, 2022

In a calm, quiet voice, Arianna recalled an instance when she lost all control.

A classmate she’d considered her friend had been increasingly bugging her, including by speaking badly about her little brother. On this occasion, the classmate had gone a step further, referring to him using a homophobic slur.

Arianna, who is being identified by a pseudonym to protect her privacy, is thoughtful well beyond her 12 years. She reads Shakespeare in her free time and aspires to be a marine biologist so she can study sea turtles and jellyfish. She recently helped found a student council at the school she attends.

But she has also endured repeated trauma at home and persistent bullying at school. She has anxiety and ADHD and sometimes struggles to manage her anger. So when that word burst from her classmate’s mouth, she felt little control over what happened next.

“I lost it,” she remembered. “My mind went blank and I just started beating on her.”

Arianna recounted this incident during a recent therapy session at Eagle House Psychiatric Residential Treatment Facility, a program run by The Village for Families and Children, which provides an array of behavioral health services in the Hartford area. Having cycled through various treatment, including stints in psychiatric hospitals, Arianna has spent the past few months at Eagle House working through her issues in preparation to return home in October.

Like much of the country, Connecticut faces what advocates call a children’s mental health crisis, exacerbated by the disruptions of the COVID-19 pandemic the past two and a half years. Those who work in children’s mental health describe an untenable status quo in which more and more kids, like Arianna, face serious behavioral challenges, requiring treatment that often isn’t available in a system that’s stretched far too thin.

“There are more children struggling with anxiety and depression, sometimes in very acute ways, and at younger and younger ages,” said Sarah Eagan, the state’s child advocate. “It’s both an increased need and, for some families, decreased access to services.”

Dr. Laine Taylor, who serves as The Village’s medical director and conducted Arianna’s therapy session, describes a multi-level crisis: Hospitals are above capacity, leaving patients who might benefit from hospitalization to instead receive sub-acute services at facilities like Eagle House. In turn, kids who might belong at Eagle House are left to receive lower levels of care — and so on down the spectrum of services.

While state lawmakers sought to address these issues through a sweeping children’s mental health bill during this year’s legislative session, many of the new programs are still months away, and the needs on the ground remain substantial.

“Even though things are starting to loosen up because we have a lot of cool new things coming,” Taylor said, “there’s still that backup of kids.”

The day began with a tour of the Eagle House campus from Taylor and one of her patients, a shy nine-year-old boy who arrived at the facility after a string of outbursts in school. He said little as he pointed out buildings along the leafy campus but lit up when he arrived at the basketball court, gleefully grabbing a ball and beginning to shoot hoops.

After the boy returned to class, Taylor explained that he’d come from a difficult, sometimes-violent home and that the tension there had inevitably affected him.

“He’s had a lot of modeling of not using your words to talk about your feelings,” Taylor said. “He has a lot of big, big, big feelings, a ton of anxiety that has come out physically with a lot of aggression.”

From there, Taylor tracked down Arianna for a therapy session, during which they furnished a dollhouse while discussing Arianna’s past. How her father abused her mother and siblings. How she struggled to make friends in school. How classmates picked on her, calling her crazy after learning she’d spent time in a psychiatric hospital.

In April, some girls at Arianna’s school targeted her and her sister over what Arianna describes as “untrue rumors.” The bullying triggered an outburst, which led Arianna to be hospitalized again.

After her release from the hospital, Arianna landed at Eagle House, where she lives and attends school while receiving regular mental health treatment. Arianna said her time at Eagle House has helped with her issues but that she looks forward to returning home next month.

At one point during their session, Taylor asked Arianna what other treatment programs she’d been through. Arianna began listing a string of services before her voice eventually trailed off.

As Taylor walked Arianna back to class following their session together, she asked the 12-year-old what she wanted to address as part of her newly formed student council. Arianna quickly mentioned a shortage of staff at the small, 15-student school.

Sure enough, minutes later principal Tina Parchin named staffing as the school’s biggest challenge. As districts statewide have faced a shortage of teachers, the issue has been particularly acute at schools like Eagle House, where all teachers must be special-education certified.

“I need to have at least three special-ed teachers, and we’re struggling to get that,” Parchin said.

Those staffing issues come as students continue to cope with the fallout of the COVID-19 pandemic, which initially kept them out of school, then forced them to learn over Zoom, then brought them back in person amid a haze of precautions.

“All of that has created kind of a wariness about school,” Parchin said. “There have been a lot of losses of experiences that support learning and keep kids engaged in learning and help them develop relationships with other kids and with teachers.”

Parchin said students are not only struggling academically as compared to pre-pandemic but are also showing less patience and greater frustration.

“What we find is we have to work on things for shorter periods of time,” she said. “It’s not realistic that they’re going to sit and do reading for an hour.”

Just before noon, Parchin led the way to a middle-school classroom, where a teacher asked students to close their laptops. As most complied quietly, one boy slammed his computer shut, then snapped a pencil angrily. The teacher shuffled over to calm him, while instructing the rest of the class to identify U.S. states whose names begin with the letter “A.”

One girl sitting toward the back of the room quickly picked out the correct four states from a list on the board in front of her and announced proudly, “That’s not that hard.” By the time the class had moved on to states beginning with “C,” the boy who slammed his computer had resumed participating, naming Connecticut and California before someone else contributed Colorado.

Soon after, Taylor sat at her office desk for a Zoom call in which clinicians and psychiatrists traded notes about their cases. She’d barely had a chance to participate when her phone rang and the therapist on the other end began describing a child who’d had an aggressive outburst, leaving the therapist uneasy about continuing to see him.

“You don’t know what you’re going to see walking in the door with this kiddo,” she said.

Later that afternoon in the courtyard of Manchester apartment building, another Village therapist, Chelsea Natal, huddled with a 10-year-old girl over a drawing of a tree.

“What does the bark symbolize?” Natal asked. “What do the triggers cause?”

“And what’s anger an example of?”

Natal then explained that the roots of the tree symbolized past trauma, lying below-ground and often out of sight.

“Our goal by the end of treatment is to cut down the tree and pull up the roots so that you can see what past trauma happened,” she told the girl. “And we dig at them to the point where they go away and you won’t necessarily have these feelings of anger and sadness.”

Natal, who worked at Eagle House before recently switching to outpatient therapy, has seen how COVID-19 and all its disruptions exacerbated underlying issues for many children. For the girl in the Manchester courtyard, the pandemic meant more time at home, cooped up with a little sister who often frays her nerves and triggers her most impulsive behaviors.

In other cases, Natal said, COVID-19 led to clinicians spent less time attending to the mental health issues they are hired to address and more time ensuring families have stable homes and adequate food.

“The needs have changed,” she said. “It kind of puts the clinical work that we want to do with the families on the back-burner and making sure that their survival needs are met first [becomes the priority].”

The changes to children’s mental health since the start of the pandemic aren’t merely anecdotal: Studies have repeatedly found spikes in mental health and behavioral issues among kids of all ages since March 2020. And, as Taylor notes, with schools shut down and inessential medical appointments postponed early in the pandemic, these problems often went unidentified for months, allowing them to fester and worsen.

As a result, Taylor says she has seen kids presenting with more and more extreme issues.

“Usually, kids will be identified at school or maybe their pediatrician’s office,” Taylor said. “And because things were so remote for so long, I think a lot of kids who would’ve otherwise been able to get [treated] earlier on and not need high levels of care [fell through the cracks].”

Taylor says she is encouraged by the children’s mental health bill passed in this year’s legislative session, which proponents say will ease hiring and retention of staff, bolster mental health in schools, increase funding for providers like Eagle House and increase oversight of behavioral healthcare.

The downside, she said, is that some of the state’s existing programs have already been shuttered, even with the new ones still months away, leaving further gaps in an already-burdened system. As an example, she cites a recently ended respite program for children who needed to be away from home but didn’t need hospital-level care.

Until a new and improved version launches, she said, those kids are more likely to end up in the hospital.

Eagan, the child advocate, emphasizes that the new bill won’t solve the mental health crisis by itself. The children’s mental health system had major holes even before the pandemic, and once COVID-19 hit, “everything got harder and worse.”

For Taylor, Natal and the team at The Village, Wednesday felt like a successful day. Arianna has made strong progress toward controlling her anger and anxiety. The boy on the basketball court has begun to open up about his feelings. The girl in the courtyard can play with her sister, at least much of the time, without losing her temper.

Still, their treatment continues, and plenty more kids wait behind them with similar issues. The crisis, Eagan says, isn’t going away anytime soon.

“In some ways the fallout from [the pandemic] is just unfolding,” Eagan said. “With kids, you can’t snap your fingers and turn the lights back on and everything falls back the way you want it to.” 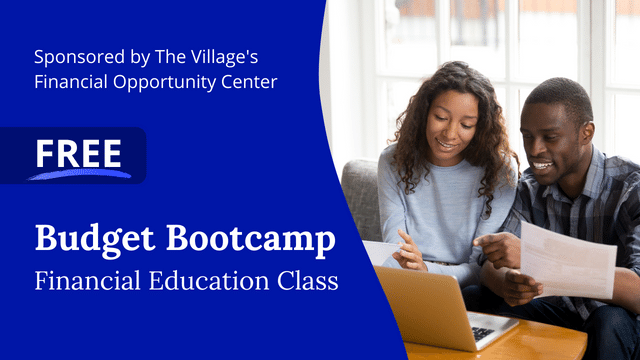 Reach your financial goals and gain tools to support your future with The Village’s Budget Bootcamp! Join us for an upcoming 3-week course that focuses on the nuts and bolts of effective budgeting in a supportive and judgment-free zone.